For more than 55 years, Guy Cotten set up a small workroom at the back of a garage in Concarneau. Today the company employs over 300 people throughout the world. These have been more than fifty years of ideas, innovation, and experiments in search of greater comfort, wear, and safety, withstanding foul weather and protecting men at sea, as well as in farming, industry and outdoor leisure activities.

Guy Cotten - for more than 55 years

We started conquering the seas in fishing ports. At the time oilskins were made of coated cotton and they were heavy, lacked comfort and really did not last. Guy Cotten observed this close at hand, in Concarneau, and together with his wife, they worked on creating tougher clothing made of PVC. The lightness of the fabric meant they could double the thicknesses and even triple it around the knees. This was a revolution on the docks. This newfound comfort was acknowledged and the clothing lasted three times longer.  The craftsman became a salesman in the evening and on Saturdays, as well as marketing his goods from boat to boat in the harbours of south Finistère.

Later to become the emblem of the company, with these words you could begin the story of the creation of:

The story starts on the banks of the Aven, near Concarneau. The Rosbras-Brigneau sailing school was in full swing. This was in 1966. The centre’s manager, Yvon Hémery, asked his friend Guy Cotten, to think how he would design practical clothing for sailing.  At the time, only jackets with poppers or pea-jackets that could be pulled on over the head were available on the market. Not very practical!
A few days and nights’ thought later and the learners at the centre were testing the first waterproof oilskin jackets.  The ROSBRAS was born!
Its design had a zip fastener and a double self-grip flap.
In record time the jacket became THE reference. Its wind and waterproof system was revolutionary on the market.  There is not one single watch jacket in the world that does not use the “Rosbras system”.
Production took off with the manufacture of the Rosbras jacket and the workroom doubled in size.

A few decades later, when you think of an “Oilskin”, you think of a yellow oilskin and the Rosbras jacket comes to mind quite naturally. It is much loved by the general public. .

1974: Once upon a time a little yellow man was born and he travelled the world!

It is 1974. A lot was happening in Sailing Schools: Classes de mer (seaside trips) attracted sea and sailing enthusiasts and there was an atmosphere of creativity.  At Rosbras-Brigneau, near Concarneau, Guy Cotten remained constantly in touch with the Sailing Centre’s manager, Yvon Hemery, the inspiration behind the Rosbras Jacket.
Alain le Quernec, who became a well-known and talented designer and poster artist, was a voluntary instructor there.
Guy Cotten wanted to create a signature for the company, which already had an international reputation. Since Alain Le Quernec had already created an attractive logo for the Sailing School, Guy Cotten asked him, Guy Cotten asked him to work on a visual creation.

“I have little experience, but I have a fierce appetite to do things. What would you really like to spring to mind?”

“They say that my clothing is as practical as a jacket and as effective as a smock. So I think it would be good to have a little man skipping around in the rain"

Very quickly the Little Yellow Man emerged as an idea. Within a week, he suggested a project to Guy Cotten, in the shape of some well advanced sketches. After a moment of silence, he asked him “isn’t that a little stiff?”
“The strength of a logo is to see far ahead. I’m sure we will reach our target with the yellow and black. You need to get used to it. If you like, we can review it in two years, but I'm not changing anything” said Alain le Quernec. The steadfastness of the professional designer unsettled Guy Cotten.  Despite a variety of opinions from friends and family, he decided to accept the project. He had no idea that he would be establishing an incredibly strong image that would be associated with his clothing.
Shortly afterwards, the logo was personalized to include the words “Cotten Oilskins”. This later became “Guy Cotten” in all simplicity

A slogan is added to the logo:
-    The initial step was to use the slogan "You feel good inside, when the weather is bad”.  This was too long and not striking enough..
-    In 1982, Raymond Le Gouës gave the brand new impetus by creating the “L’Abri du Marin” (The sailor’s shelter) baseline. During an  informal discussion between Guy Cotten and Raymond Le Gouës, one of the two men suggested the idea. It is difficult to say whose idea it really was, and they decided to share its fatherhood.  Guy Cotten was immediately won over "I've been looking for something for a year, and I like it!”. The conversation that only lasted a few minutes would result in something that would continue for 27 years.

An increase in the number of large offshore races and a real enthusiasm for the sea, as well emergence of partnerships with important names in sailing was to accelerate the company’s success.

The “original” models of the initial years were continually improved as time went on, creating highly specialized ranges for specific sectors such as fishing, yachting, farming, leisure activities. Quality was always the watchword with the aim of offering clothing at the top end of the market. Many innovations took place over the years and they were the company’s driving force. They rendered the clothing more comfortable and provided its wearers with greater safety. Several patents were registered such as the yachting trousers for women or with a belt harness, the TPS suit, OTARIE swimsuits, flotation jackets, X Trapper bib and braces, Top 3D, to name but a few.

2002 Nadine Bertholom-Cotten took over management of the company

Her father, Guy Cotten, remained President of the Supervisory Board. This change came about naturally. It was the concrete expression of a successful partnership between Mr Cotten and his daughter, who had worked as his right hand for nearly 20 years.

Spurred on by Nadine Bertholom-Cotten, the company launches new ranges:
•    A children's range using the brand names of Kid Cotten and Chantepluie.
•    A tailored women's range made with elegant materials.
•    A “Cotton line” of trousers, shirts and short-sleeved shirts for Men, with T-shirts and sleeveless T-shirts for Women and Children.

This patented system is marketed in 2007. Little by little it is included in all the ranges.

It aims to provide its customers with a comprehensive offer. It includes 1 and 2-zip suits, multiple-pocket trousers, sleeveless jackets, T-shirts, etc.

2011 First research into assembling fabrics reputed to be incompatible

Dremtech+ waterproof-breathable 3-layer fabric and Nylpêche PVC, withstanding fishing industry requirements. This is an innovation in terms of comfort for professionals in the years to come.

2012 The range of professional quality GC boots is launched

The feedback on the various markets is very good.

A new Generation of all-weather gear is launched: the Drembib bib& braces  and the Drempro jacket.

The original skipper leaves the cockpit. Nadine Bertholom-Cotten, his daughter continues to maintain the company's course and guide it in its choices. The boat is in good experienced hands, involved in the company history for more than 30 years, 11 of which at its head.

Guy Cotten, father of the Little Yellow Man.
Guy Cotten, born into a farming background, he lived for the sea and its sailors. He spent and incredible amount of time and energy in designing clothing that would protect them from the elements, and comfortable floating wear to keep them safe.
He spent time walking along the quays listening to users.

“By remaining close to people, we saved a lot of research time and had good feedback”

He created such a strong brand that it has entered the language. It has replaced the word “oilskin”. You often hear people say “Put on your Cotten”. “You haven’t forgotten your Guy?”
This strength can also be seen in the symbol of quality it conveys “Cotten quality”.
It is a great recompense for the continuous search to innovate and the capacity to always provide a little more comfort to tough sea-related trades, fishers, skippers, etc.
Captain of industry, Guy Cotten led his company towards distant horizons in more than 30 countries and seas worldwide.
He exported the Breton values of work and conscientiousness all over the world.
He left the quays in April 2013. “Have a good fishing trip Guy! You haven’t forgotten your Guy?” could be read on the website of a fisherman.

-    Guy Cotten sponsored Gilles Gahinet in the 1980s, on the Figaro Bénéteau circuit, and wanted to create a connection by competing with a boat in the brand colours in the seasons of 2014 and 2015. Safran followed us on this project. The name of the talented Gwénolé Gahinet stood out, and was a nod to the past! In two years, Gwénolé won the Transat AG2R brilliantly with Paul Meilhat, was crowned First Rookie in the Solitaire du Figaro 2014, came second in the event in 2015, and took a very nice 5th position at the end of the Generali Solo, in the French elite single-handed ocean racing championship. What success!

These were two intense and highly rewarding years. I feel that I have made progress sailing, but also in the way that I handle a professional project. Safran and Guy Cotten gave me all the keys to progress and have marked the way forward.

Already present in many countries, the little yellow man has boldly set a course for the export market. Scandinavian countries, Italy, Australia, South America, and Japan are the challenges of the future.

2018-2019: A new factory to optimize and increase production 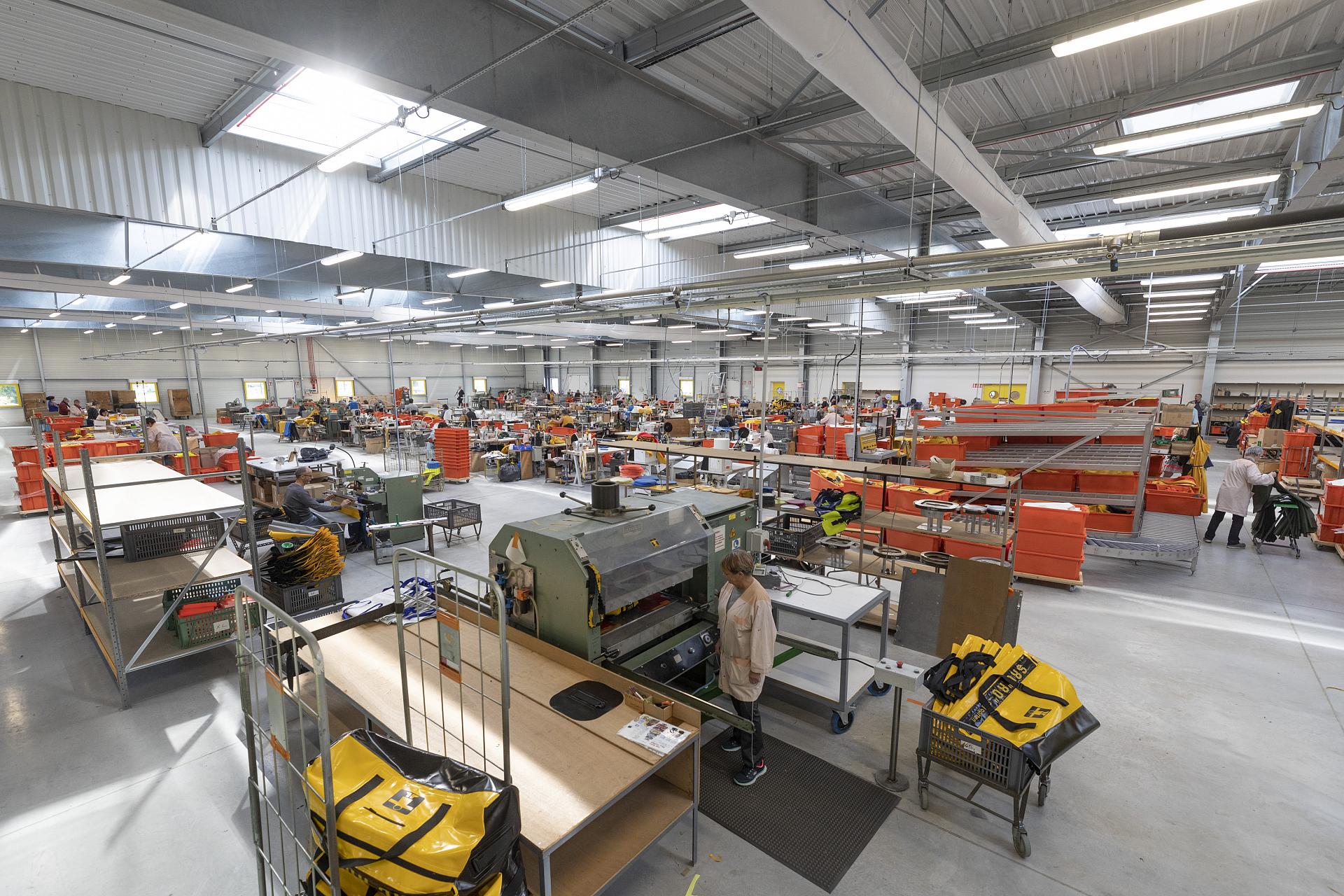 A new Guy Cotten plant is being designed in Trégunc (500 m from the current site) to increase production capacity, in the face of well-filled order books in France and internationally. The 4500 m² of factory brings together all the production services.

This new industrial tool represents a total investment of € 5 million.

The plant was designed to work in self-consumption. That is to say that the 600 m² of solar panels (manufactured in France) installed by EDF ENR for a total power of 99.96 kWp should allow to supply a third of the annual electrical needs of the building (lighting, ventilation and heating equipment). production), "equivalent to the electricity consumption of around 40 households"

Although we are seeing the return of the classic yellow oilskin, the brand image of this Breton firm, the company has a much broader expertise, which it adapts with flying colours to develop in line with market expectations!